East Austin Studio Tour, a.k.a. E.A.S.T., was started in 2003 by Shea Little, Jana Swec, and Joseph Phillips of Big Medium studio (then called Bolm Studios) to highlight artist’s studios and galleries in east Austin where — once upon a time — rent was cheaper.

I attended E.A.S.T. in 2004 and 2005 and really enjoyed meeting the artists and seeing their artwork and studio spaces.

Then from 2006-2008, I opened my east Austin home and studio (such as it is) to the touring public. It was great to have folks come to my space and talk about my art, to make some friends, and sell a few paintings.   But it is a lot of work to prepare for such an event, and having just had my first solo show (which was also a huge amount of work), I decided not to open my studio this year.

I have been thrilled to attend E.A.S.T. as a visitor again. For the past three years, I have really missed visiting other artist’s spaces, seeing their work, talking about their art, and of course, meeting the artists!

This year E.A.S.T. has been expanded to two full weekends, with additional events nightly throughout the week between.  My hubby and I tried to visit as many painter’s spaces as possible on both weekends, though we weren’t able to make it to the weeknight events.  By the end of the first weekend, we had only made it through about 1/3 of the sections listed in this year’s tour book. We started at the Pump Project Art Complex, which houses about 20 artists. 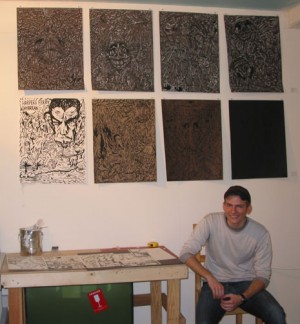 Josh Dihle, a talented young painter and illustrator with some of his drawings and comic book pages. We began with Leanne’s Venier’s great studio and enjoyed seeing her lovely colorful abstractions and chatting with her for a bit.   We moved on to Josh Dihle‘s space —  Josh is currently working on a comic book. He has mad illustration skills, and I love his paintings as well.  Plus, he’s a really nice guy.

We also stepped into Debra Broz‘s studio for a bit; besides drawing, painting, and collage, Debra is also a professional ceramics restorer and is (or is it was?) a writer and co-editor for local contemporary art magazine, Cantanker, AND manager of the Pump Project Art Complex.  Plus she was selected as one of the artists in this year’s (Twenty-fourth) New American Talent exhibition at the Arthouse.

We checked out the whimsical work of illustrator Audrey Lopata — great stuff!  You can read an interview with her on the Austinist.

We then visited with Jan Roset for a bit, and I really enjoyed looking at her gorgeous bodies of work — she and I are both really into color — lots of it and high intensity, too.  I love her new “monkey brains” series, but then I love all of her series — lots of energy in her work!

Then we stopped in the studio of Katherine Sheehan, who does some wonderful prints, mixed media and collage works, and very large pastel drawings.  As we were peering at some of her works, she walked in to discover that someone had run their fingers through the fur pattern on a large pastel drawing of an ocelot, kind of ruining the drawing!  She was pretty copacetic about having to fix it, though — much more than I think I would have been.

A few minutes later as we were about to head upstairs, there — next to his mom — stood a small child, hands all covered in brown and black pastel!  Culprit found.

We then checked out most of the studios upstairs, finishing our tour of Pump Project with Mark Johnson.  As we walked into his small but very cool space, Mark was typing his business cards on an actual typewriter.  He looks like he ought to be wearing a pork-pie hat, and working under one of those old-fashioned green glass lamps.

Mark incorporates text and wires into his already compelling paintings and drawings.  Normally, I’m not a big fan of text in a painting, but what Mark does with text takes it to a whole other level, and makes his work even more visually interesting.  I almost stumbled into a piece that had wires sticking straight out about 2 feet into the space, and on the ends of the wires were letters which read “Where is the ”  Anyway, Mark is a very cool guy, great fun to talk to, and creates wonderful work.

Just as we were leaving Mark’s studio, in walks the kid with dirty hands, his hands now clean.  As he starts trying to pull the letters off Mark’s piece mentioned above, his mother at least tells him not to touch the art (though she didn’t stop him from touching it).  Sigh!

After Pump Project, we headed over to the Ginko Studios complex — a place that feels like it’s in the country but is actually right in the middle of east Austin.  If I have my story straight, after graduating from UT grad school about 20 years ago, Sunyong Chung made a wise investment in the house and land that is now Ginko Studios on the banks of Boggy Creek; she and her husband, sculptor Philippe Klinefelter, have their residence and studios here.

Sunyong is a potter who will be having a solo sculpture exhibition in the Spring of 2010 at the Austin Museum of Art.  Philippe creates large-scale public sculptural installations and works in granite, wood, and metal.  Her studio and showroom reflect the delicacy of her work; while Philippe’s studio is jammed with all kinds of industrial-looking equipment, tools, and projects.  Outside on the grounds are huge chunks of granite and 12-foot mounds of leftover granite chips.

From thoroughly enjoying wandering around on the grounds and studios at Ginko Studios, we headed over to Ian Shults’ home studio. I love what he’s doing in his paintings — how they seem to start out as representational works, but become somewhat abstracted in the breaking up and merging of the image and the “background.” Michael Schliefke is also showing at Ian’s space; Michael is a super-nice guy with some fabulous comic books, “Tales of the Really White Vigilante” (East Austin’s Superhero – which I’m looking forward to reading) — and he’s also an accomplished painter.

For our last stop of the day, we headed over to the Bolm Road complex of studios; Big Medium (where it all began), Bay6 Gallery and Studios, where I have spent many wonderful hours in the past couple of years, and Cari Washburn’s new space, Clay Under Fire Studio | Pigoata Studios.

I think I’ll let the pictures tell the rest of the story; click on the tiny thumbnails at the bottom of this post to see all the pictures from this day in random order, OR view them in order here: Day One.

This site uses Akismet to reduce spam. Learn how your comment data is processed.

The best kind of writing, and the biggest thrill in writing, is to suddenly read a line from your typewriter that you didn’t know was in you.