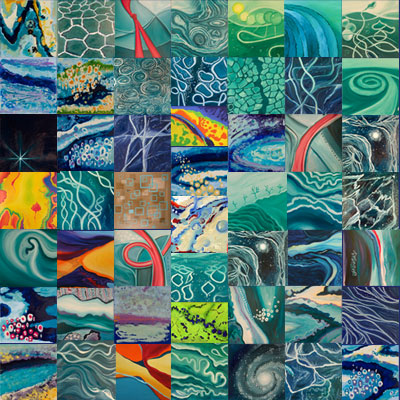 This is that time of year when I think it’s natural for us to look back and see what we accomplished (so we’ll know what to focus on next year, and what to pat ourselves on the back for). This has been a really good year for me, artwise, and I think–even with this sucky economy–it’s only going to get better. Call it faith, call it hope, call it what you will. It’s a great feeling that has eluded me for far too long, so I hope to hang on to this feeling.

This year I painted about 50 paintings — which for me is a lot, as I also freelance as a designer/illustrator, and my clients have kept me very busy for the past few years!

I began the year with the small 12″x12″ succession paintings, in oil (back to my old favorite), in which each new painting evolves from the edge of the previous painting. These 20 paintings constitute one large–60″x48″–piece, which you can see here. You can read about the 7-month process beginning here (all links in this post open in the same new window or tab).

A few pieces I painted for the succession series didn’t make the cut, but may go into another multi-panel series. I also did another 24″x24″ oil painting, which was a bit of an experiment, though I’m thinking of working on it some more — there are a few areas I feel I’ve never resolved to my satisfaction. Also began about 3-4 other related works.

In May, I did a couple of 5″x7″ acrylic paintings to donate to the 5×7 Show at the Arthouse, seen above.

Just before I finished the Succession series in July, I whipped out the ten blue encaustic paintings, some of which are here.

At this point, I still wanted to paint fast, as one does with encaustic, but with more control, as with oil paint. So I started working on a 36″x36″ canvas in acrylic. Yowza! It felt great! I was very energized by the speedy process, and pretty happy with the result. So I did eight more over the next few weeks, and two more within the next couple of months. Woo-hoo! And there are actually several more that I’ve started but haven’t completed yet.

PAINTINGS ON THE TRAIN (IN VAIN) – 5 PAINTINGS

Well, I tried to do five little (6″x6″ and 5″x7″) paintings on the train to LA, which I am reworking now that I’m back on steady land. Here is the first one completed. 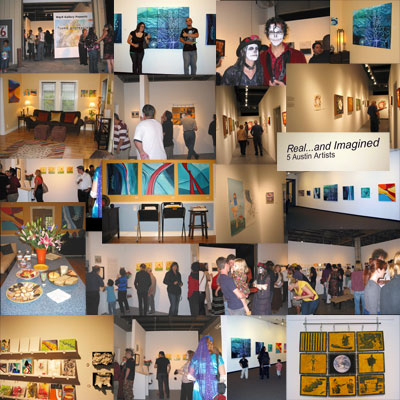 The 5×7 show at the Arthouse had a happening opening in May (view pics here).

I was invited to participate in the Texas Kaos/Netroots Nation After Party and Art Exhibit at Bay6 Gallery and Studios–political art for a political conference. My pieces went over very well with the Netroots Nation crowd. You can view pics of the opening here.

In August, I showed many of my ten new encaustics works in a show of Texas Wax Artists at Jerry’s Artarama.

For the month of October, the Real and Imagined show mentioned above was on display at the Fort Worth Community Arts Center in Ft. Worth. Pics here.

Also in October, one of my new acrylic paintings was selected to be in the AVAA 2D Works Exhibit at ABIA (Austin-Bergstrom International Airport). It will continue to be on display until the end of January 2009.

View the pics of the November opening of works by Texas Wax artists here.

My last show of the year, the East Austin Studio Tour, during which I open my home and studio for art lovers to view my art…me and 200 other artists on the East side of town, that is. You can see pics of my open house here.

I finally finished my 7-month Succession Series project of 20 interrelated paintings, painted individually, but with connecting edges and related ideas. I painted these in oil, after spending the past 2 years painting primarily in encaustic.

It felt like coming home to paint in oil again, yet I approached this work with a different sensibility, a different palette than I normally use, and slighter different techniques.

The above painting is the result: I’m still struggling to get a good shot of the whole painting, alas.

You can see the individual paintings on my website here: Succession Series — click on any thumbnail for the full view of each piece.

I will say without reservations that from my point of view there can be no abstractions. Any shape or area that has not the pulsating concreteness of real flesh and bones, its vulnerability to pleasure or pain is nothing at all. Any picture that does not provide the environment in which the breath of life can be drawn does not interest me.