I just learned that Ray Yoshida, one of the Chicago Imagists and one of my painting teachers at the School of the Art Institute of Chicago, passed away this week. 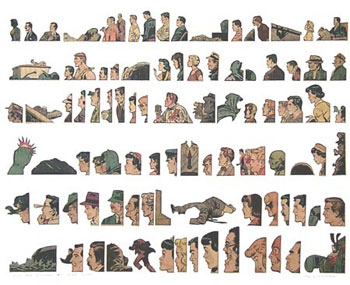 I studied with him in an advanced painting studio for one semester: he once told me my work was “too sentimental.” (Thank goodness!).

I’m sad and very nearly speechless. So, let me just quote from the NYT article:

“He was very important to a lot of people there,” said Robert Storr, dean of the Yale University School of Art and a student of Mr. Yoshida in the mid-1970s in that school’s master of fine arts program. “As a teacher he was mysterious and witty. The mystery would draw you in, and then he would say something funny but with an edge that would make you think — kind of like his paintings.”

And the Chicago Tribune wrote a nice story on the life of Ray Yoshida (09-30-2010: which they have since removed).

But if you want to really get a sense of what it was like to have Ray for a teacher, artist Laurie Fendrich captured it beautifully.

How true. We’ll miss you, Ray.

Painting, n. : The art of protecting flat surfaces from the weather, and exposing them to the critic.